By region, North America is anticipated to drive the atrial fibrillation surgery market in the future.

AFib is mostly brought on by chaotic signals that cause the atria, the two top chambers of your heart, to contract quickly and out of time. Because of how swiftly they contract, the heart's walls fibrillate. AFib may result from electrical system damage to your heart. The heart's upper chambers (the atria), which should pulse in unison with the lower chambers (the ventricles), instead beat chaotically and irregularly during atrial fibrillation. A-fib may not show any symptoms in many people. However, A-fib may result in palpitations, a quick, pounding heartbeat, shortness of breath, or weakness. In otherwise healthy individuals, atrial fibrillation rarely poses a major risk to life or health. However, if you have diabetes, high blood pressure, or other heart conditions, atrial fibrillation can be deadly. Atrial fibrillation can be treated with both medical treatments to reestablish a healthy cardiac rhythm and medications to decrease heart rate and lower the risk of stroke. You can be sent to a heart specialist or treated by a general practitioner (a cardiologist). 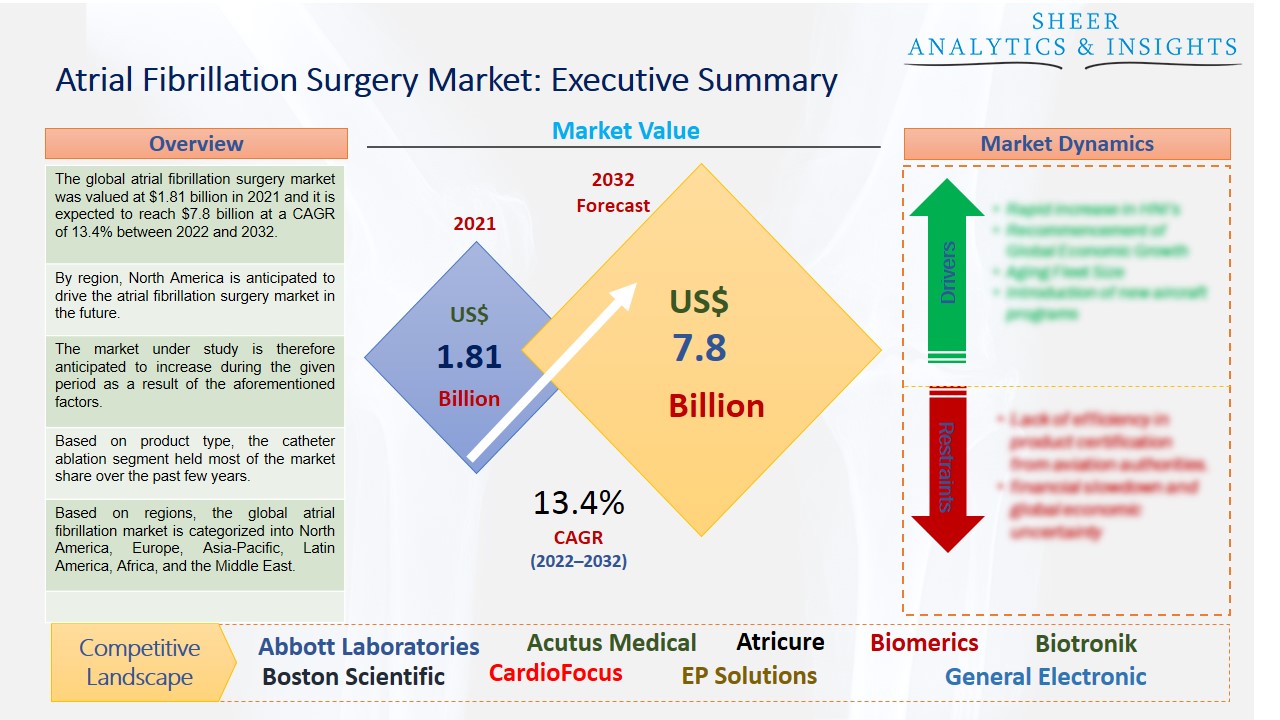 During the projection period, there is expected to be a rise in demand for atrial fibrillation surgeries due to the increased prevalence of risk factors such as obesity, tobacco use, and blood pressure around the world. However, a significant obstacle facing the atrial fibrillation surgery industry is the dearth of qualified surgeons to carry out such operations in developing nations. Additionally, the pilot seeks to assist cardiology and sleep specialists in better comprehending the crucial connection between the two disorders as well as the most efficient way to simultaneously treat AFib and OSA. Therefore, the market is anticipated to be driven by developments in atrial fibrillation therapies.

The market under study is therefore anticipated to increase during the given period as a result of the aforementioned factors. However, it is anticipated that the high cost of treatments and regulatory concerns related to these devices will impede market expansion. However, a significant obstacle facing the atrial fibrillation surgery industry is the dearth of qualified surgeons to carry out such operations in developing nations.

Based on product type, the catheter ablation segment held most of the market share over the past few years. This segment is anticipated to drive the market over the forecast period from 2022 to 2032. This is due to the surgical procedure's limited invasiveness, attractive reimbursement rules, and relatively cheaper surgical expenses. Following the conclusion of the catheter ablation, patients are typically able to leave the hospital after an overnight observation. Additionally, atrial fibrillation may be treated by catheter ablation. In conjunction with a comprehensive treatment plan, catheter ablation may enhance your quality of life and remove or significantly lessen the uncomfortable symptoms of atrial fibrillation, such as weakness, fatigue, or shortness of breath.

In terms of surgery type, surgical ablation and surgical center segments are projected to dominate the market with significant growth. Minimally invasive surgical techniques include Catheter Ablation and Minimize. As a result, less surgery is needed and less post-operative observation time is needed. Patients can typically be released the same day or after an overnight stay. This makes it simple to do these treatments in surgical centers.

Based on regions, the global atrial fibrillation market is categorized into North America, Europe, Asia-Pacific, Latin America, Africa, and the Middle East. Among these, the North American region holds most of the market share and is also expected to hold its dominant position during the forecast period. Due to the high frequency of atrial fibrillation, high patient disposable income, and modern healthcare infrastructure, this region is also a significant market for atrial fibrillation. Other factors influencing the segment's growth include the region's advantageous reimbursement regulations and highly developed healthcare infrastructure. Due to rising public healthcare spending, more knowledge, and the rapid rise in the prevalence of lifestyle disorders including obesity, diabetes, and high blood pressure, the Asia Pacific area is expected to grow the fastest. On the other hand, the Asia-Pacific market is anticipated to become the second-fastest market in the future. Government actions to support healthcare and strong economic growth have given this region's emerging markets a tremendous amount of room to grow. Key players in the worldwide atrial fibrillation market, however, are focused on obtaining regulatory clearances, developing technologically cutting-edge products, introducing new products, and partnering and acquiring other businesses.

The Global Atrial Fibrillation Surgery Market Has Been Segmented Into: