The Global C4ISR Market was $100.6 Bn in 2019, and it is expected to reach $214 Bn by 2028. It is eventually growing at a commendable high compound of annual growth rate CAGR of 7.0% between 2020-2028. However, the current pandemic of COVID-19 might make a slight difference in the growth rate in the present year. Factors such as, competitive intelligence for the next-generation warfare, conflicts resolution, rising demand for radio-electronic warfare systems and increasing amount of data for controlling are projected to trigger the market growth over the forecast period. 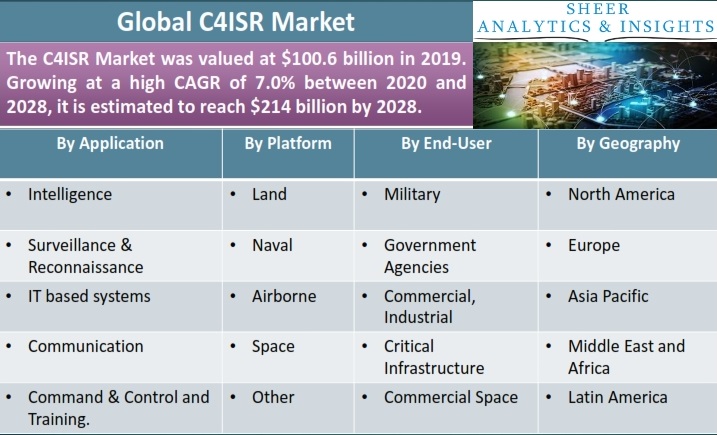 The global C4ISR Market has been segmented into Application, Platform and End-User. By Application market is segmented into Intelligence, Surveillance & Reconnaissance, IT based systems, Communication, Command & Control and Training. In terms of Platform - Land, Naval, Airborne, Space. While end user is segmented into Military, Government Agencies, Commercial, Industrial, Critical Infrastructure, and Commercial Space. Communication is estimated to witness remarkable growth over the forecast period due to increasing technological advancements over communication field.

By Region, North America is Holding the largest Market share

The global C4ISR Market has been geographically segmented into North America, Asia Pacific, Latin America, Middle East, and Africa region. In addition to this, North America C4ISR Market is holding the largest market share currently and is estimated to show the steady compound annual growth rate in the upcoming forecast period due to the increasing tension between US and China presently. US is increasing their investment over different warfare methods, especially in communication and at the same time increasing its surveillance over China activities. The Asia Pacific market, however, is projected to be the fastest-growing market over the forecast period due to factors such as increased spending by Indian as well as Chinese government. Europe region is also anticipated to show a decent growth rate over the forecast period. The LAMEA market is expected to grow at the lowest CAGR due to sluggish activity over warfare enhancement.

The Global C4ISR Market Has Been Segmented into: