By region, North American region is leading the commercial satellite imaging market across the globe.

Commercial satellite imaging captures many pictures of the earth and used them for various commercial purposes. It is a type of tool which is used to visualize high-resolution datasets of ground conditions. It searches a map or any locations and areas to compare dates, prices, and resolutions with other suppliers. Furthermore, it also offers engineering infrastructure, telecommunications, precision agriculture, disaster recovery, forestry, and watershed management. These major factors are driving the growth of the commercial satellite imaging market over the last few years. Some key players are focusing on introducing different types of commercial satellite imaging that can detect and identify ground conditions at night with radar imagery, which can help the civil and defense sectors across various regions. Moreover, the other factors such as increasing concern about whether changes, disaster monitoring, and security concerns are estimated to boost the market growth during the upcoming years. Additionally, satellite imaging provides data on the chemical, physical, and biological properties of the planet and this wide information is used by various scientists and other major research companies so they can develop advanced and innovative products for future purposes. 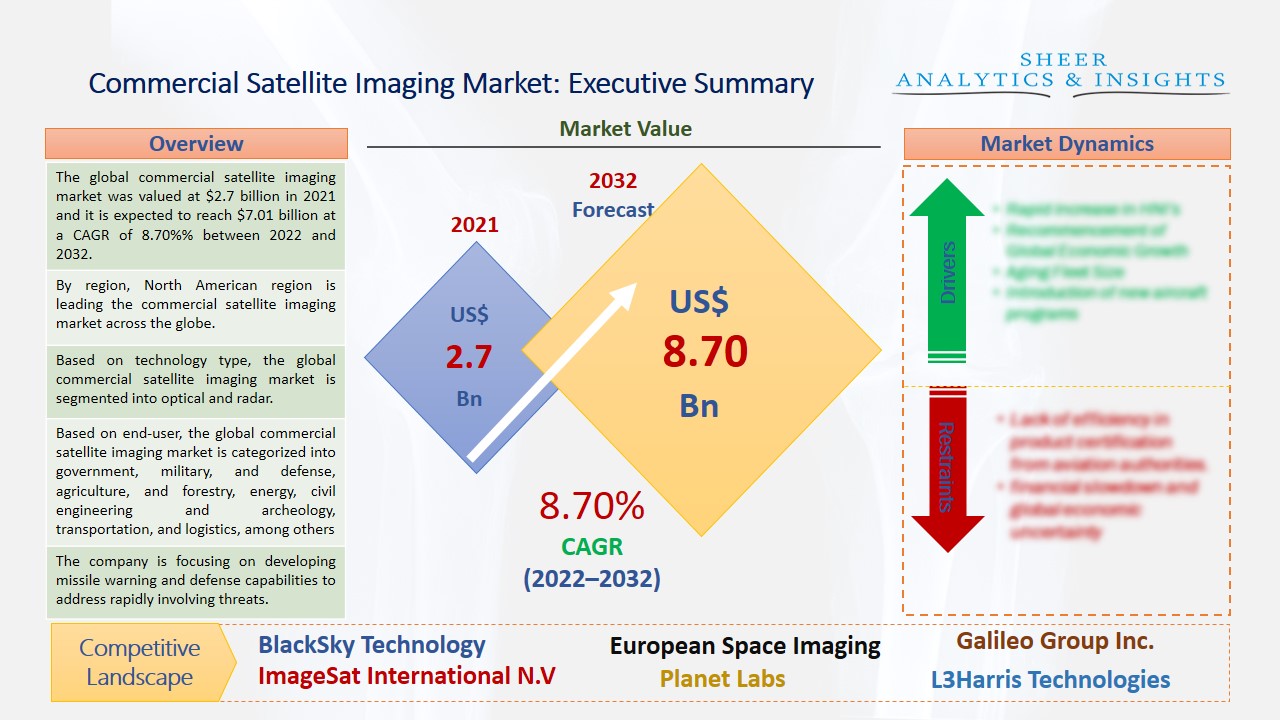 Based on technology type, the global commercial satellite imaging market is segmented into optical and radar. The radar segment is accounted for the largest share and this segment is expected to boost the market growth during the forecast period due to the increasing usage of satellite imaging in taking pictures at night time. Based on application, the market is segmented into defense and intelligence, surveillance and security, energy and natural resource management, disaster management, urban planning and development, geospatial data acquisition, and mapping. The geospatial data acquisition and mapping segment is anticipated to have growth opportunities due to its rising services for most government agencies and defense authorities for many applications. Along with this, the defense and intelligence segment is also expected to drive the market due to the current threat of terrorism and attacks on essential infrastructure, which can be tracked and detected through mapping the location; thus, it can be protected by adopting preventive measures.

France-based company Airbus Group Company operates the largest constellation of optical and radar commercial Earth observation satellites available on the market at present days by offering extensive and accurate surveillance solutions for a wide range of industries and applications. Pixxel Aerospace Company has launched India’s first private commercial imaging satellite Shakuntala, which has the highest resolution camera facilities flown to the space. SI Imaging Services is the exclusive company that has provided high-resolution satellite imagery across many countries around the globe. The company has launched KOMPSAT-2 which is an earth observation satellite to collect high-resolution imagery of the Korean peninsula. U.S based company BlackSky Technology Company has upgraded customers' site monitoring experience with enhanced analytics and image capabilities. Additionally, this company sets the net standard for agile satellite operations to support customers during the crisis in Ukraine. European Space Agency is going to launch Rosalind Franklin Rover in the second half of the year 2022, which is planned to be the first European Mars rover.

Moreover, U.S-based Company L3Harris Technologies has established an innovation accelerator and collaboration initiative called the Agile Development Group to rapidly address near-peer and national security threats. The company is focusing on developing missile warning and defense capabilities to address rapidly involving threats. Maxar Technologies Company has launched SiriusXM’s new SXM-7 Satellite, which is a high-powered digital audio radio satellite. This would provide audio entertainment and information services to consumers in the U.S country. These new innovative products from various well-known companies are expected to drive the growth of the market during the forecast period.

The Global Commercial Satellite Imaging Market Has Been Segmented Into: