The global fluoropolymers market was valued at $8.9 billion in 2021 and it is expected to reach $18.5 billion at a CAGR of 6.8% between 2022 and 2032. The demand for polymers is increasing in manufacturing industries such as electrical appliances, semiconductors industries, and others which are expected to drive the market growth during the forecast period. Moreover, electronics industries in developing countries such as India, China, South Korea, and Japan are focusing on adopting fluoropolymers along with the presence of R&D activities is also expected to increase the market growth in the upcoming future.

By region, Asia-Pacific is leading the fluoropolymers market across the globe.

Fluoropolymers are widely used in various applications for several industries such as automobiles, electrical and electronic, and chemical industries. Automotive industries are expanding in countries such as India, China, Mexico, the U.S, and Indonesia due to new product launches by automobile manufacturers such as Toyota, Volkswagen, and GM, among others. Thus, it is likely to impact the market positively in the upcoming future. Based on product type, the market is segmented into PTFE, FEP, Fluoroelastomer, PVDF, PVF, PFA, ETFE, and other sub-segments such as PCTFE, ECTFE, among others. PCTFE and PVDF are dominating the market due to the increasing demand for these segments in the automotive industries for automobile fuel and engine systems. 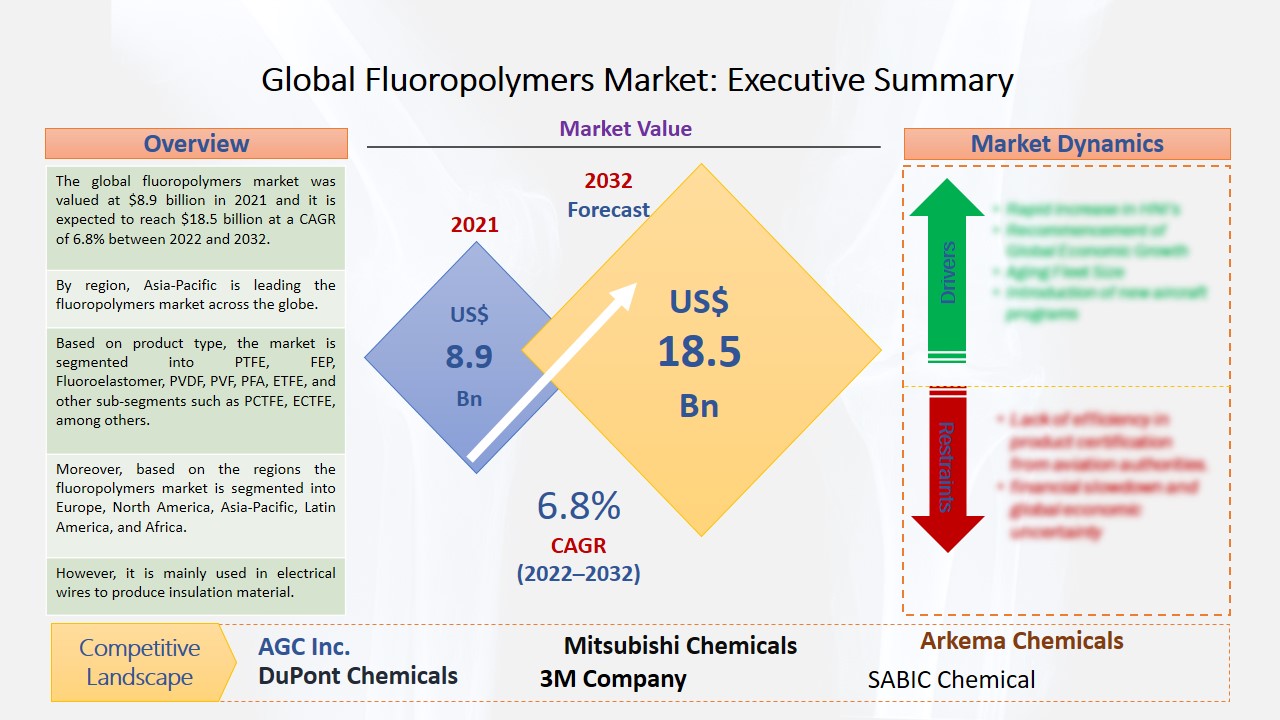 Based on end-user, the fluoropolymers market is segmented into electrical and electronics, construction, transportation equipment, industrial equipment, and others. The transportation, electronic and electrical segment is expected to dominate the market in near future. The transportation segment is categorized into aerospace, automotive vehicles, and others. The electrical and electronic segment is further categorized into wire and cable, photovoltaic modules, batteries, and fuel cells. Furthermore, Industrial equipment is segmented into the semiconductor, manufacturing equipment, chemical and pharmaceutical equipment, and other industrial processes. Moreover, based on the regions the fluoropolymers market is segmented into Europe, North America, Asia-Pacific, Latin America, and Africa. Among these regions, the Asia-Pacific has dominated the market over the past few years and the region is expected to hold a similar position during the forecast period.

Fluoropolymers strengthen the properties of coatings that are widely used in modern industrial equipment, construction products, and several household appliances. However, based on product, the PTFE market dominated the global fluoropolymers industries over the few years. Along with this, polyvinylidene difluoride is further expected to witness the fastest growth. However, it is mainly used in electrical wires to produce insulation material. Additionally, increasing expenditure towards the development of architectural coatings by chemical manufacturing industries such as Solvay is anticipated to make new growth opportunities in the upcoming years.

The Global Fluoropolymers Market Has Been Segmented Into:

The Global Fluoropolymers Market – By Application:

The Global Fluoropolymers Market – By Regions: