Blockchain Technology Market has successfully incorporated rectifications against all major failure models which has massively impacted business models for generations, which is likely to augment the demand of the technology throughout various industry verticals. Byzantine fault tolerance being a major feature incorporated through blockchain where each node crash can be properly prevented and rectified as there are series of blocks protecting each node form crashing and a series of backup data to make a pre-empted data set based on backup data provided by the existing series of chains. The legendary problem of double spending has also been major innovative system incorporation in blockchain technology. It also legitimizes the transaction without any intermediary also combines proof of transaction, digital identity of the inception block and follows till the end user making it impossible to create a double spending loop since both the parties being present in the same chain creating a massive potential market for various applications and industry to adapt the technology from 2021 to 2031. 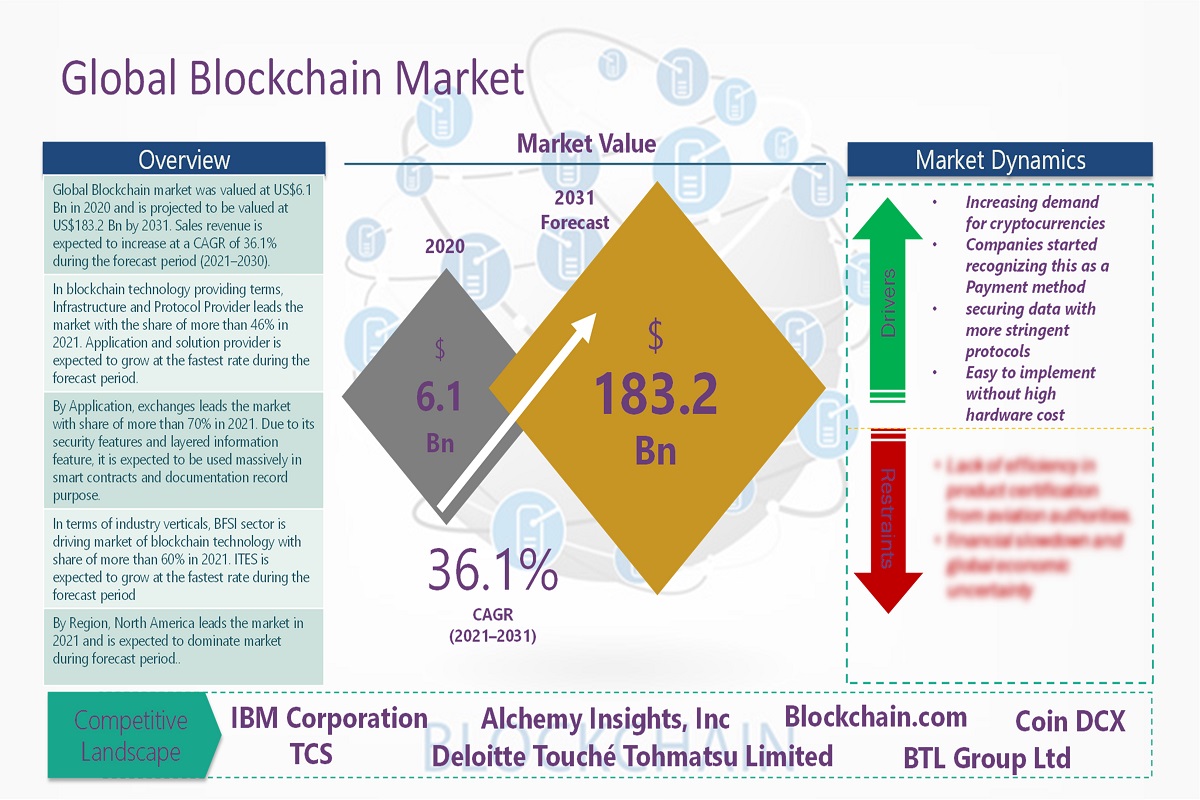 Which holds major share of application market. But with growing popularity of other applications such as smart contracts, documentations and digital identity, and exchanges, share of blockchain usage in payment methods is expected to go below 36.8% through the forecast period 2021-2031. Market of ‘Blockchain technology’ is still at a very nascent stage and with a billion dollar investments in research and development of applications throughout various industry verticals, market growth has a very high potential.

Major applications of blockchain technology covered in report are payments, exchanges, smart contacts, ‘documentation and digital identity covering various sectors as banking, financial services and insurance (BFSI)’, ‘government and public sectors’, ‘healthcare and life sciences’, ‘retail and e-commerce’, automotive, and ‘media and entertainment’. World Economic Forum predicted 10% of the global GDP to be stored in Blockchain by the year 2031.

Global economy is on the verge of a tectonic shift towards a transparent system with legitimacy where Blockchain technology plays a vital role influencing the shift with its innovative approach of distributed open ledger where transactions are noted permanently with digital identity, documentation, payment history, smart contracts and many more where all the information is stored in blocks with a chain of blocks backing up the data since inception giving record keeping a whole new platform. Proof of work mechanism is also a platform where intellectual properties can be transferred or kept without any chance of replication or delicacy or false claims as the network itself keeps a record of the inception of the property in the original block where it first appeared providing a platform with millions or even billions of users verifying the legitimacy. Transparent economic environment would provide a new world with a solution to accountability, one of the major problems which have consequences in every aspect of economic flaws and corruption. Blockchain technology has the potential to create a corruption free and accountable environment leading to massive impacts on every domain possible.

North America as a leader in the technology investing a huge amount of resources to innovate more applications of Blockchain technology throughout the sectors providing a pathway for others to join the platform in order to develop an accountable economic culture with long term benefits and impacts. Europe is also in the verge of expansion with blockchain technology as major companies like Microsoft, KPMG, IBM implementing them throughout their own distribution system creating platforms globally for faster delivery and growth of blockchain. Market of blockchain technology will experience a massive and sudden boost in terms of revenue, potential applications, and industry verticals providing and creating a network of blockchain to operate at a very fundamental level.

Scope of the Report

The global Blockchain Technology market has been segmented into: