India passive optical network market was valued at $7.5 billion in 2021 and it is expected to reach $56.4 billion at a CAGR of 19.80% between 2022 and 2032. A passive optical network is a type of system which is generally used by telecommunications network providers that brings fiber optic cabling and signals to a large number of end-users. Furthermore, it consists of an optical line terminal at the communication company’s central office and many optical network units for nearby end customers.

By region, India passive optical network market is expected to grow at an impressive rate during the forecast period.

There are several benefits and limitations of passive optical networks such as these are cheaper to deploy compared to most alternative broadband delivery technologies, they do not require electrically powered midspan devices to operate, they use existing fiber optic, their upgrade paths are plentiful, and throughout rates are keeping up with alternative technologies, they are considered a secure broadband technology, and they can be transported over a relatively long distance, such as 20 kilometers, on a central office loop. Therefore, these major factors and benefits have driven the passive optical network market to gain significant growth in India. Another major factor such as the surge in the demand for establishing fiber-to-the-home and fiber-to-the-business and others due to the increasing digitalization across the globe is estimated to drive the market growth during the forecast period from 2022 to 2032. The Indian government is also supporting the market by promoting the growth in digital evolution, availability of funding for conducting research and development to improve performance, and increase applications of passive optical networks is estimated to boost the market growth. 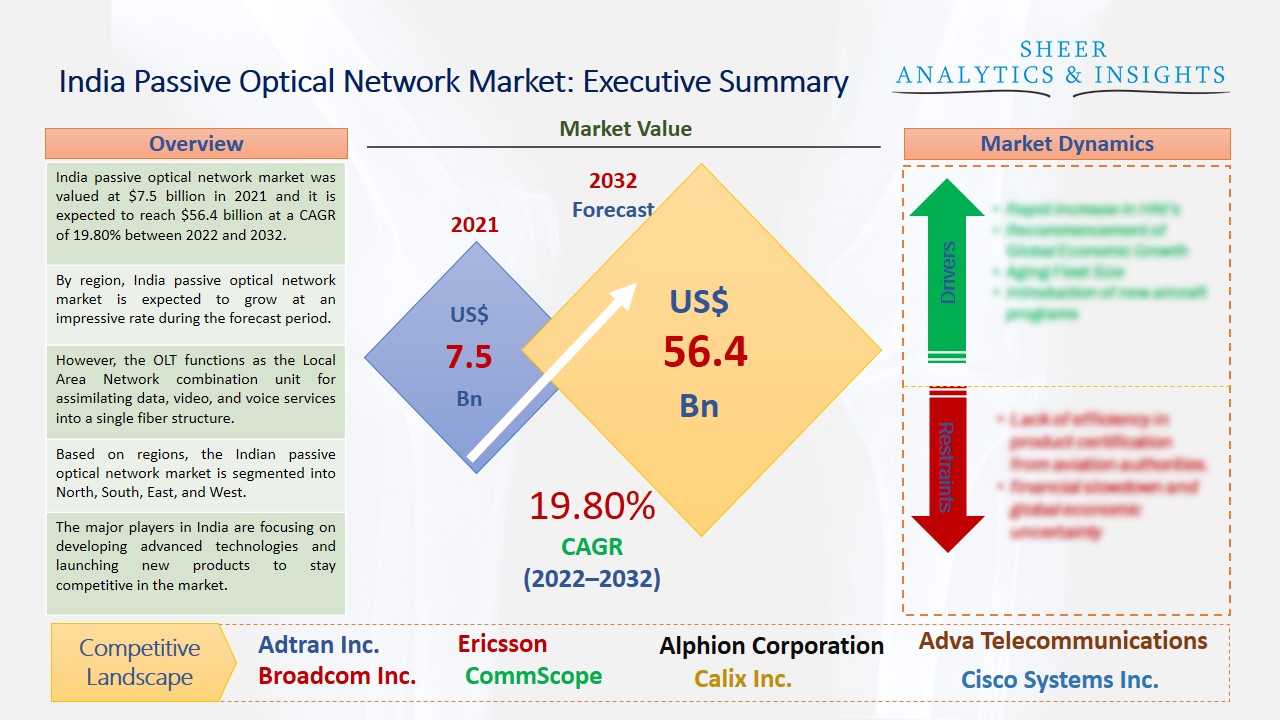 The major players in India are focusing on developing advanced technologies and launching new products to stay competitive in the market. They are implementing some strategies such as mergers and acquisitions and new product development. A U.S-based company called CommScope, which have launched a coexistence portfolio to upgrade their passive optical network to increase their data speed and provide additional services and solutions without having to replace or add fiber to their existing passive optical infrastructure. In 2021, an India-based internet service provider called AirFiber Networks, which have launched data services by using Gigabit Passive Optical Networking. In addition, Nokia is providing GPON solutions to AirFiber, which would enable high-speed broadband services in Bangalore and underpenetrated areas across the Tamil Nadu state. Additionally, they are focusing on reaching over 100,000 subscribers per year. Moreover, the Nokia Telecommunications Company has launched 5G passive optical network technology to enable the converging of high-end solutions on single fiber infrastructure. Besides these new launches, the demand for green network solutions is estimated to drive the growth of the Indian passive optical network market throughout the upcoming years from 2022 to 2032.

The India Passive Optical Network Market Has Been Segmented Into: