By region, Asia-Pacific holds the maximum share of lighting equipment market across the globe.

The growth rate of LED technology is increasing, which is further replacing the usage of Non-LED applications across the global market. Therefore, the adoption of energy-efficient lighting technology is growing in demand. Moreover, several major drivers such as increasing worldwide population, growing urbanization rate, integration and creation of advanced technology, and innovative products such as LED and other lights, are supporting the market to gain significant growth across the global market. These factors would serve as an opportunity for the lighting equipment market. Lighting equipment has several divisions such as lamps, fixtures, lighting controls, control gear, ballasts, and lighting management systems. The off-grid solar sector is growing significantly, as it is energy-efficient and provides other facilities for consumers. Over the last few years, the application of LEDs in the off-grid solar system has increased, which has further driven the market growth of lighting equipment. 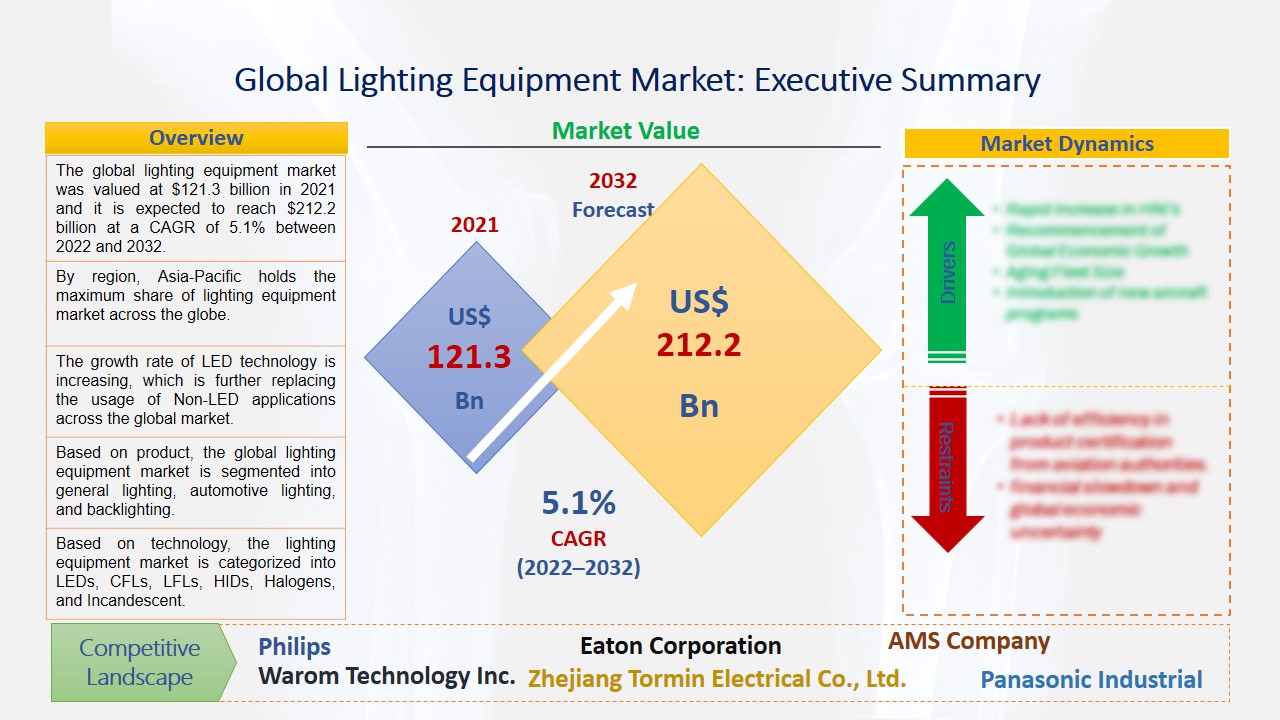 Based on product, the global lighting equipment market is segmented into general lighting, automotive lighting, and backlighting. The automotive lighting segment is expected to witness significant market growth during the forecast period due to its rising usage on the front, rear, sides, and other sides of the vehicle as well. Thus, it consists of lighting and signaling devices to benefit the customers and road users. It can alert other drivers and pedestrians to the presence of a vehicle while driving. General lighting is also expected to be the fastest-growing segment throughout the upcoming years due to the rising of LEDs in sectors such as stadiums, residences, offices, and others.

Based on technology, the lighting equipment market is categorized into LEDs, CFLs, LFLs, HIDs, Halogens, and Incandescent. Among these, the LED segment is holding the largest market share across the globe. The adoption of LEDs is rising due to their usage in automotive vehicles, television screens, smart watches, smartphones, bulbs, and many more. Based on end-user, the residential segment is expected to dominate the lighting equipment market across the globe due to the rising demand for new and innovative products of lighting equipment at regular intervals. Additionally, the lighting manufacturing companies are focusing on designing new LED products, which will consume less electricity with better durability features. Geographically, the market is divided into North America, Europe, Asia-Pacific, Latin America, Africa, and the Middle East Countries. Asia-Pacific region is expected to dominate the lighting equipment market in upcoming years due to the involvement of various small and large, registered and unregistered major players across the region.

The Global Lighting Equipment Market Has Been Segmented Into: