The global omega-3 PUFA market was valued at $ 2.4 billion in 2021 and it is expected to reach $ 6.7 billion at a CAGR of 9.50% between 2022 and 2032. Omega-3 PUFA is an essential component of the membranes that surround each cell in our body. Among the types, the DHA levels are mainly high in brain cells, retina cells, and sperm cells. Additionally, omega-3 also provides calories and energy to our body and has several functions in our heart, blood vessels, lungs, immune system, and endocrine system as well.

By region, Asia-Pacific is dominating the global omega-3 PUFA market over the last few years.

Key factors such as increasing occurrences of Cardiovascular Diseases and changes in dietary habits are responsible for the growth of the omega-3 PUFA market. The main importance of immune system development is increasing among the worldwide population and is driving the growth of the market over the last couple of years. Food products including omega-3 PUFA as nutritional ingredients in the diet to support heart and brain health are also estimated to propel the growth of the market across the globe. Demand for DHA is increasing in the U.S country due to the rising cases of obesity among the geriatric population. Therefore, with the government's support, the U.S FDA has approved omega-3 supplements for the treatment of people who are more than fifty years old having chronic diseases such as obesity and hypertriglyceridemia. 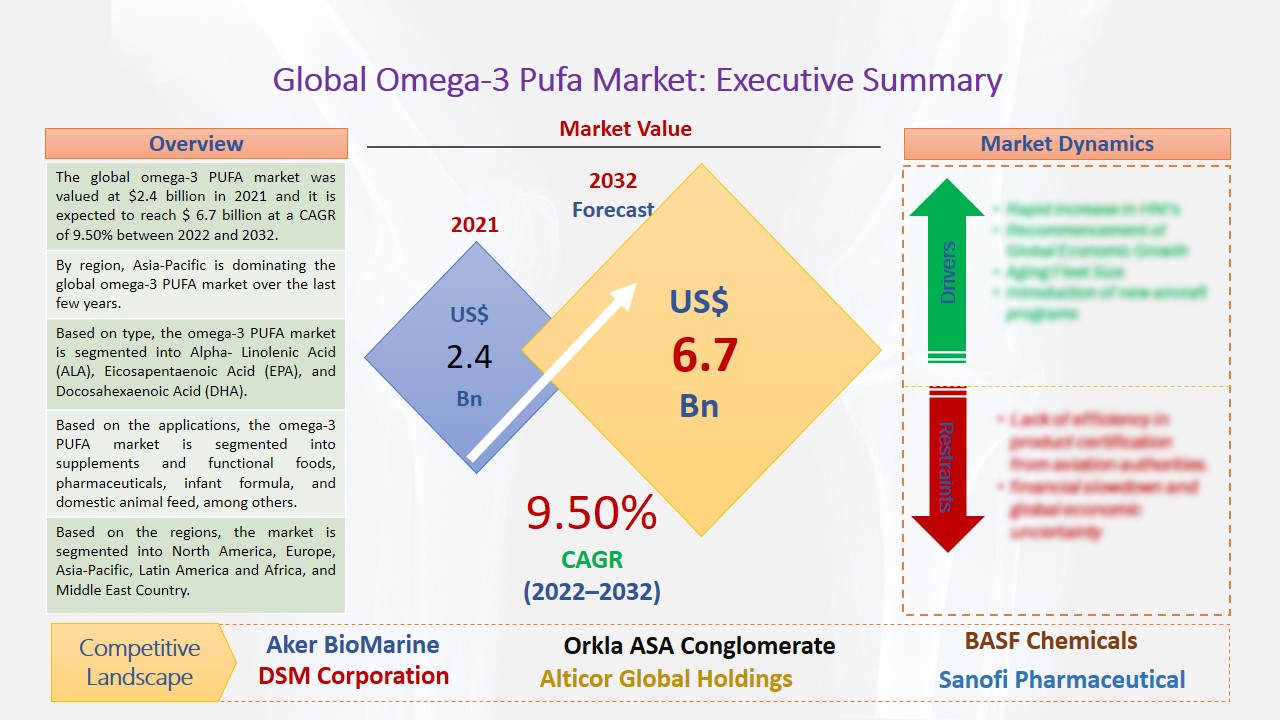 Based on type, the omega-3 PUFA market is segmented into Alpha-Linolenic Acid (ALA), Eicosapentaenoic Acid (EPA), and Docosahexaenoic Acid (DHA). The DHA segment has dominated the market with a large number of revenue shares in the last few years. EPA segment is also expected to be the fastest-growing segment due to the increasing demand for omega-3 as dietary supplements. Based on source, the plant source segment is expected to propel the market during the upcoming years due to its ability to decrease or maintain blood pressure in the human body. Based on the applications, the omega-3 PUFA market is segmented into supplements and functional foods, pharmaceuticals, infant formula, and domestic animal feed, among others. Among these, the supplements and functional food segment has dominated the market with a significant market share in the last couple of years.

Based on the regions, the market is segmented into North America, Europe, Asia-Pacific, Latin America and Africa, and Middle East Country. The Asia-Pacific region is dominating the market and the region is estimated to hold a similar dominating position during the forecast period from 2022 to 2032. Therefore, the Asia-Pacific region is expected to be the fastest-growing market in the upcoming years. Additionally, the North American region was the largest regional market in 2020 due to the increasing focus of various key players on developing their market growth by providing high-quality omega-3 food supplements to their customers.

The Global Omega-3 PUFA Market Has Been Segmented Into: