The global organ on chip market was valued at $69.2 Million in 2021 and it is expected to reach $1600 Million at a CAGR of 31.9% between 2022 and 2032. The market for organs on chips is anticipated to expand more quickly thanks to strategic agreements between market participants and rising drug screening requirements. An increasing number of partnerships and collaborations between pharmaceutical companies, new product releases, and technical improvements are all expected to contribute to the market's expansion.

By region, North America is driving the organ on chip market with significant share over the past few years.

The size of each organ chip, including the lung, liver, intestine, and brain, is comparable to an AA battery. The transparency of the chip enables researchers to view the organ's cellular and molecular functioning, behavior, and response. The organ chips are put into a computer-like research system. Additionally, the system uses membranes, chambers, channels, etc. to control the behavior and movements of cells and materials. Systems called "Organs-on-Chip" (OoCs) contain artificial or real tiny tissues grown inside microfluidic chips. The chips are made to regulate cell microenvironments and preserve tissue-specific functionalities to more closely resemble human physiology. Furthermore, drug development expenses for treating sickness could be reduced by using human organs on a chip. According to FDAReview.org, just one out of every ten medications that undergo clinical trials is approved by the FDA. Emulate has worked with Johnson & Johnson and Merck to test and develop applications for their human organs-on-a-chip technology. 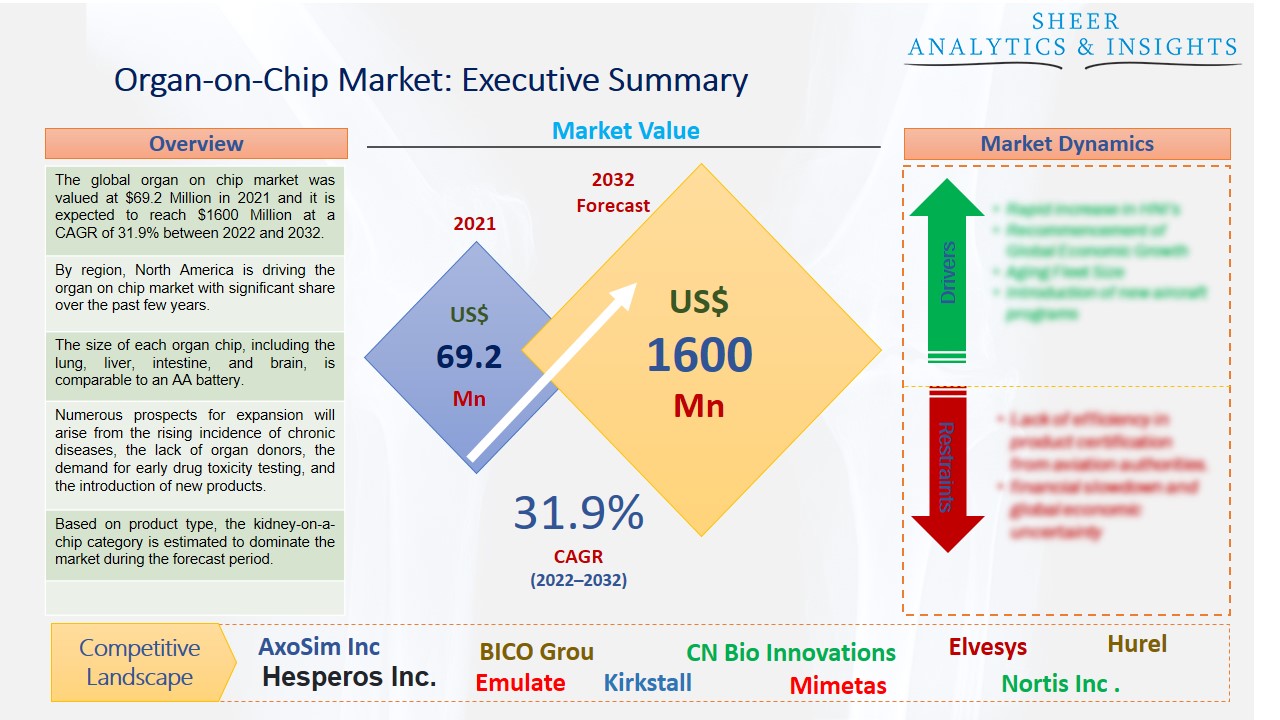 Numerous prospects for expansion will arise from the rising incidence of chronic diseases, the lack of organ donors, the demand for early drug toxicity testing, and the introduction of new products. However, problems including the expensive price of organs on chips could limit market expansion. To acquire a competitive advantage, end goals can be determined and marketing strategies can be improved with the aid of a comprehensive analysis of the drivers and challenges. Furthermore, it is projected that increased R&D by leading players, enhanced drug screening methodology, strategic initiatives, and growing technical improvements will all contribute to the market's growth throughout the forecast period. Additionally, difficulties integrating organs-on-chips technology into current workflows and the complexity of organs-on-chips models may somewhat restrain industry expansion in the years to come. These major factors are anticipated to accelerate the market growth during the forecast period from 2022 to 2032.

Companies that produce organs on chips are increasingly using big data to manage the data produced by OOCs. The problems that data created from OOCs can overcome include sharing, integrating, and interpreting the data. Implementing big data algorithms on current high-speed computer systems is essential for efficiently using the generated data.

Based on product type, the kidney-on-a-chip category is estimated to dominate the market during the forecast period. The rising number of patients with renal disease is primarily responsible for the expansion of the kidney-on-a-chip market for the worldwide organ-on-chip market. In addition, scientists are using kidney-on-chip technology to track the development of any medicine related to the human kidney. During the anticipated time, these crucial variables may have a substantial impact on the market expansion. Besides this, the chip-on-a-heart category is also expected to dominate the market due to rising cases of diseases related to heart surgeries and others. The top cause of death worldwide, according to the WHO, is heart disease. Heart-on-chip technology has become quite popular in recent years due to the increased risk of cardiovascular diseases (CVD) associated with adopting a modern lifestyle. The segment's growth during the forecast period may be supported by these variables and R&D.

In terms of application type, the disease modeling category accounted for the largest share of the market and is projected to accelerate the market growth in the upcoming years. Additionally, its use in platforms including type 2-diabetes, pulmonary edema, central nervous system disease, and protein-induced lung inflammation can be credited with this market expansion. All of these factors could boost the demand for organ-on-chip technology for disease modeling and accelerate market expansion. However, OCC and R&D segment is also projected to become the largest segment in the future. Because many pharmaceutical companies are concentrating on drug testing utilizing organ-on-chip models, the largest section of the Organ on Chip market.

Geographically, North America has led the market over the past few years and is expected to hold its dominant position during the forecast period. The significant growth of the North American organ-on-chip market is mostly due to the region's expanding healthcare applications and cutting-edge technological advancements. The presence of top-tier researchers and scientists also contributes to the region's industrial growth. The U.S country is the biggest geographical market for Organ on a Chip. Because of the availability of a wide range of goods and services provided by large firms, such as the custom design of new chips with particular organ arrangements and the rise in toxicity testing of chemicals on various organ cell types. On the other hand, the market in the region will increase as a result of rising disposable income among the populace and supportive government financing for regenerative medicine research institutes. The scale of the organ-on-chip market will be boosted shortly by product innovation, collaborative partnerships, and private-public strategic alliances. Furthermore, South Korea, Australia, Japan, and China all have regulatory environments that are favorable to the acceptance of OOCs.

The Global Organ on Chip Market Has Been Segmented Into:

The Global Organ on Chip Market – by Product Type:

The Global Organ on Chip Market – by Application Type:

The Global Organ on Chip Market – by Regions: