The global retina health market was valued at $12.3 billion in 2021 and it is expected to reach $28.7 billion at a CAGR of 7.7% between 2022 and 2032. The market is primarily driven by the expanding older population, increased exposure to blue light, and rising prevalence of several vision problems such as macular degeneration, refractive errors, cataract, inflammation, diabetic retinopathy, corneal opacity, trachoma, and dry eye syndrome.

The nerve layer at the back of your eye known as the retina is responsible for detecting incoming light and transmitting visual information to your brain. The primary causes of vision loss and blindness worldwide are retinal diseases such as age-related macular degeneration (AMD) and diabetic retinopathy. A detached retina happens when the retina is wrenched out of its normal position in the back of the eye. The optic nerve carries visual signals from the retina to the brain. Detachment causes eyesight to become hazy. Without treatment, a detached retina is a dangerous condition that can result in blindness. In addition, the market is also growing as a result of an increase in product launches, partnerships, collaborations, mergers & acquisitions, and government initiatives. As a result of their high per-capita spending on healthcare items, including eye health supplements, consumers in developed nations like the U.S., Canada, Australia, and the U.K. help drive market expansion. Additionally, the market is being driven by rising demand for eye health supplements including bilberry extract, lutein, and zeaxanthin, as well as easy access to these supplements through direct sales and e-commerce platforms. These primary factors are driving the market over the last few years. 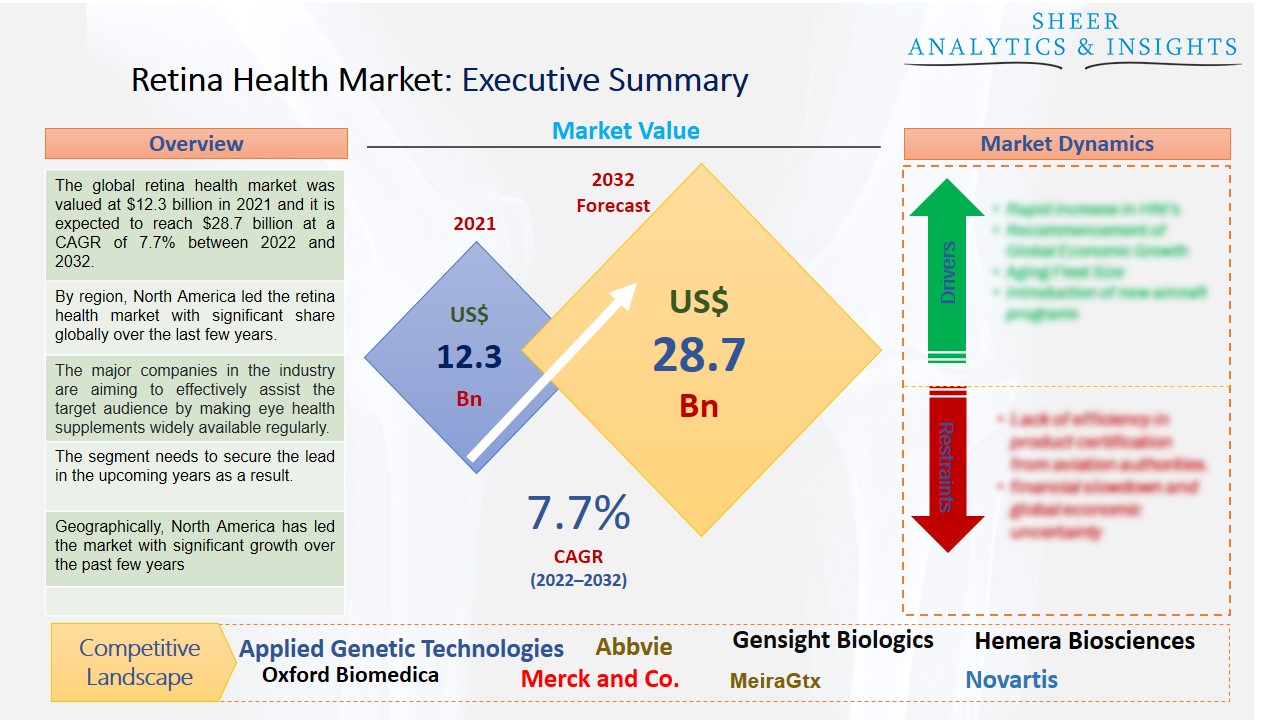 The major companies in the industry are aiming to effectively assist the target audience by making eye health supplements widely available regularly. Additionally, logistics accessibility is crucial for the market expansion of eye health supplements. As a result, several initiatives are being made to create a fully functional supply chain system and distribution channels by the conclusion of the global forecast year in 2032. This will enable the market to expand in timely meeting demand. These would create more growth opportunities for the market in the future.

Some of the greatest constraints of the global market include the expensive cost of sophisticated retinal surgery technologies, the low adoption rate in developing nations, rigorous government restrictions related to medical devices, high treatment costs, and insufficient reimbursements. Additionally, the demand for cutting-edge integrated technologies during retinal surgeries and the inability to provide them owing to financial limitations may also decelerate the market's growth in the years to come.

Based on treatment type, the drugs medication segment accounted for the largest share of the market and is anticipated to boost the market over the forecast period. One of the most practical and secure approaches to treating retinal disease is medication therapy. Additionally, taking medications is simple and successful, and since it is a non-invasive process, it is favored by the majority of patients. The segment needs to secure the lead in the upcoming years as a result. The strong segment growth is also attributed to rising public knowledge of the advantages of lutein and zeaxanthin supplements in the prevention and successful treatment of a variety of eye illnesses, primarily AMD, diabetic retinopathy, uveitis, and cataract.

In terms of disease type, the diabetic retinopathy category holds most of the market share and is also estimated to accelerate market growth in the future. The thin layer at the rear of the eye is referred to as the "retina." This microscopic layer converts the light that reaches the eye into electrical signals that the brain can then interpret as images. Macular degeneration and diabetic retinopathy are the two main retinal illnesses that impact millions of individuals globally. The increased incidence of retinal diseases such as Age-Related Macular Degeneration (AMD), diabetic retinopathy, retinitis pigmentosa, and retinal detachment is one of the key drivers driving the retina health market.

Geographically, North America has led the market with significant growth over the past few years and is also anticipated to hold its dominant position during the forecast period from 2022 to 2032. Most of the key players are situated in this location which is an advantage for several emerging countries across this region. The North American retina health market is anticipated to expand quickly due to a variety of factors, including the high prevalence of retinal diseases and the existence of key market players in the area. The largest revenue share of the market in North America can be attributed to several key factors, including the rising prevalence of chronic eye disorders, particularly AMD, diabetic retinopathy, glaucoma, and dry eye syndrome, as well as growing awareness and the widespread availability of commercialized eye health supplements. On the other hand, the Asia-Pacific region has led the market growth over the past few years due to rising cases of health issues related to the eyes of many consumers.

The Global Retina Health Market Has Been Segmented Into: