The global software defined networking market was valued at $10.3 billion in 2021 and it is expected to reach $89.9 billion at a CAGR of 20.9% between 2022 and 2032. Software-defined networking also known as SDN is an emerging architecture that is dynamic, manageable, cost-effective, and adaptable which is ideal for the high-bandwidth, dynamic nature of today’s applications. SDN provides choice in automation and programmability across data centers, campuses, and wide area networks as well.

By region, North America holds the highest market share in the software defined networking market across the globe.

SDN serves as a foundation element of comprehensive intent-based networking architecture. Furthermore, it is limited to automated provisioning and configuration. To enhance the user experience, many key players in the market are focusing on improving their scalability and, automated data center services, policies, and securities. They are also focusing on expanding their business growth by implementing new strategies and developing innovative products to draw the attention of a large number of customers across the globe. These factors are expected to drive the growth of the market during the forecast period from 2022 to 2032. Moreover, the software-defined networking architecture is directly programmable, agile, centrally managed, programmatically configured, open standards-based, and vendor-neutral. SDN is rapidly being used by enterprises, telecom services providers, and cloud providers, among others as it promotes flexibility and scalability in the network. Hence, these major factors are driving the growth of the global software-defined networking market. 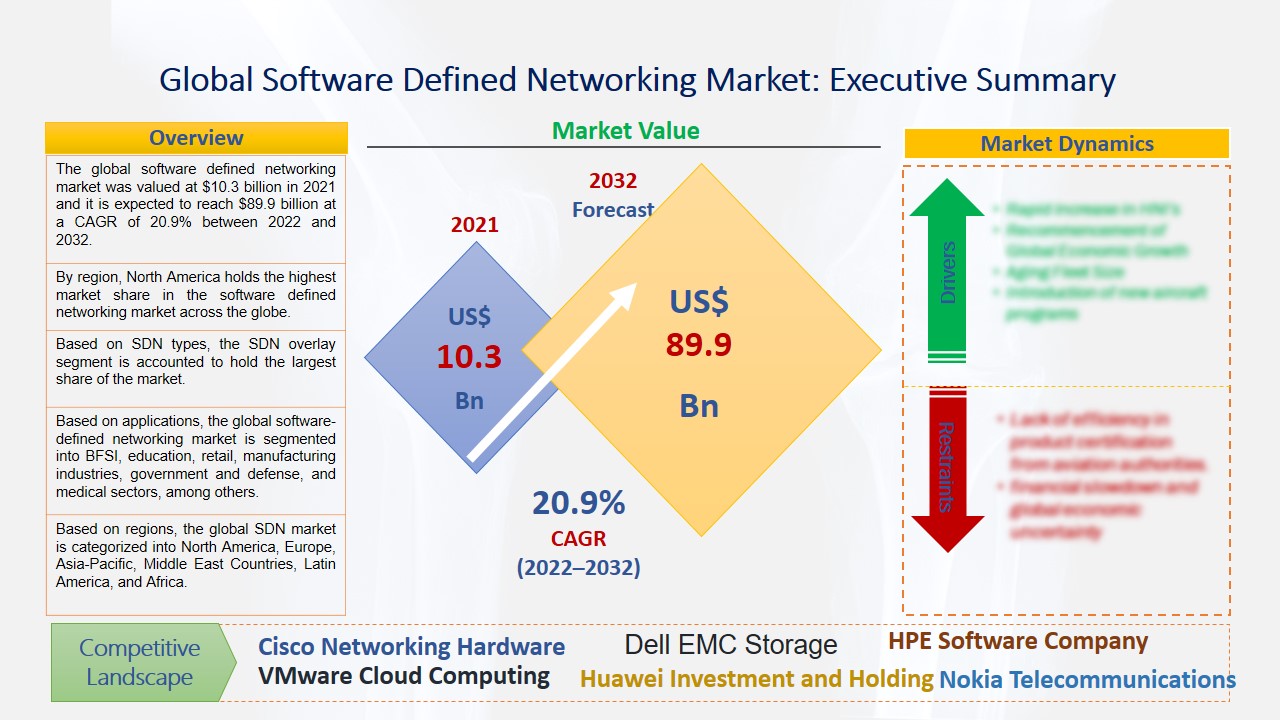 Based on SDN types, the SDN overlay segment is accounted to hold the largest share of the market. The overlay optimizes network resources by distributing bandwidth into channels and allocating each channel to particular devices or services. Based on services, the software-defined networking market is segmented into integration and deployment, training and maintenance, and managed services. Managed services are the most popular and dominant segment in various industries as they can decrease complexity and offer lower costs to the service providers. Therefore, the managed segment is expected to propel the SDN services segment due to the rising demand for agile, cost-effective, and efficient services increasing in the global market. Based on end-users, the enterprise category is expected to become the popular and largest segment during the forecast period due to the increasing adoption of SDN solutions in various enterprises across the globe.

Based on applications, the global software-defined networking market is segmented into BFSI, education, retail, manufacturing industries, government and defense, and medical sectors, among others. The IT and telecom category is expected to boost the SDN market during the forecast period due to its growing demand in various organizations and the offer it provides such as CAPEX and OPEX with cost-reducing capabilities. Based on regions, the global SDN market is categorized into North America, Europe, Asia-Pacific, Middle East Countries, Latin America, and Africa. Among these, North America has been dominating the market over the last few years due to the growing adoption of internet facilities, rising population, and technological advancements, which are expected to drive the market growth in the North American region. The Asia-Pacific is also expected to be the fastest-growing market throughout the upcoming years due to rising technological advancements and benefits such as better service quality, visibility, scalability, and reduced cost effects, which are further estimated to drive the market growth.

The Global Software Defined Networking Market Has Been Segmented Into: