The global video surveillance and vsaas market was valued at $20.4 billion in 2021 and it is expected to reach $71.3 billion at a CAGR of 11.5% between 2022 and 2032. Video surveillance and VSaaS services are mainly used to observe scenes and specific behaviors that are unusual or improper, which might need immediate action due for the safety of people. The service provides video cameras, audio recording systems, and other various tools or systems. Security cameras are common components and are widely used in various locations or places across the regions.

By region, Asia-Pacific holds the largest revenue share in the video surveillance and vsaas market across the globe. 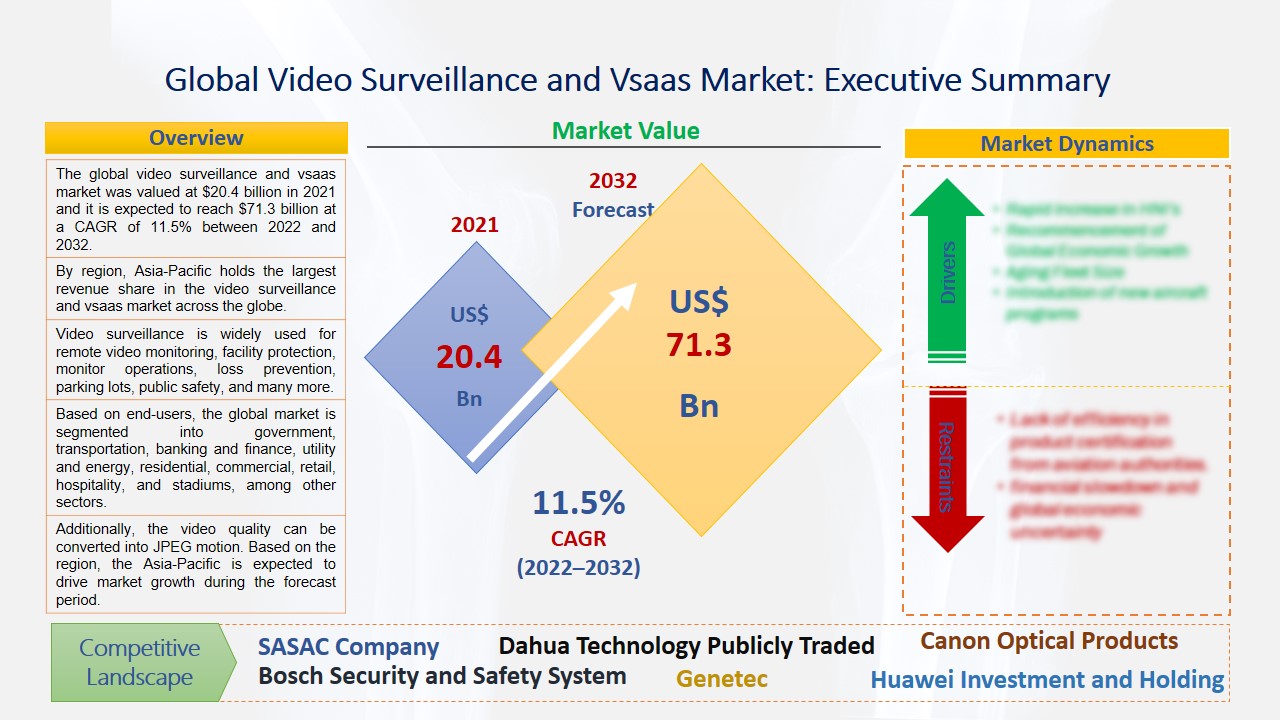 Based on product type, the market is segmented into analog and IP-based. Among these, the IP-based surveillance category holds the maximum revenue share and it is estimated to witness significant growth during the forecast period from 2022 to 2032 due to better flexibility features with advanced technologies. Additionally, the adoption of IP-based video surveillance camera is increasing, which provide the camera with the enhanced video quality. Based on components, the global video surveillance and VSaaS market are categorized into software, hardware, and other services. The hardware segment is expected to witness huge growth throughout the upcoming years due to its increasing services such as cameras, monitors, encoders, and recorders, among others.

Based on end-users, the global market is segmented into government, transportation, banking and finance, utility and energy, residential, commercial, retail, hospitality, and stadiums, among other sectors. Among these, the retail and transportation categories are estimated to witness significant growth in upcoming years due to the increasing demand for cloud-based services and awareness and promotion of advanced video surveillance application management and solutions. Along with these, residential, commercial, corporate offices, and baking sectors are also expected to drive the growth of the global video surveillance and VSaaS market during the forecast period. VSaaS is becoming more popular due to technological advancements which provide facilities such as H.264 video compression with high-speed internet connections. Additionally, the video quality can be converted into JPEG motion. Based on the region, the Asia-Pacific is expected to drive market growth during the forecast period. The region also held more than 35% market share in the last couple of years. In developing countries such as India and China, the adoption of VSaaS services is growing. For instance, the Indian Institute of Technology, and Indian based Railway Company named RailTail Corporation of India Limited developed artificial intelligence and video surveillance system respectively, which is mainly used on railway platforms for security reasons. Other regions such as North America and Europe are also expected to dominate the market with a significant growth rate throughout the upcoming years.

The Global Video Surveillance and Vsaas Market Has Been Segmented Into:

The Global Video Surveillance and Vsaas Market – By Product Type:

The Global Video Surveillance and Vsaas Market – By Components:

The Global Video Surveillance and Vsaas Market – By End-Users:

The Global Video Surveillance and Vsaas Market – By Regions: