The global electric vehicle (ev) powertrain market was valued at $16.7 billion in 2021 and it is expected to reach $180.1 billion at a CAGR of 21% between 2022 and 2032. Automotive electric powertrains are in great demand due to the rapid growth of the electric car sector. Electric vehicles have increased significantly in popularity around the world. To enhance their market share and take advantage of the rising sales of electric and hybrid vehicles, major automotive component makers have been investing in electric axle drives.

By region, Europe holds most of the share of Electric Vehicle (EV) powertrain market across the globe.

Hybrid mobility solutions have replaced traditional automobiles as a result of rising fuel prices and increased environmental concerns. This element has fueled the market's expansion. Additionally, the focus of automakers on the creation of small, lightweight e-powertrain systems that are appropriate for daily transportation will facilitate the market's rapid expansion in the years to come. In addition, since conventional fuel vehicles are anticipated to become less common in the coming years, electric vehicles are the way of the automobile industry. These cars are becoming more popular because they offer better environmental advantages and a cheaper total cost of ownership than cars powered by internal combustion engines. Many nations have developed strict regulations to promote the use of alternative fuel vehicles, including electric automobiles. 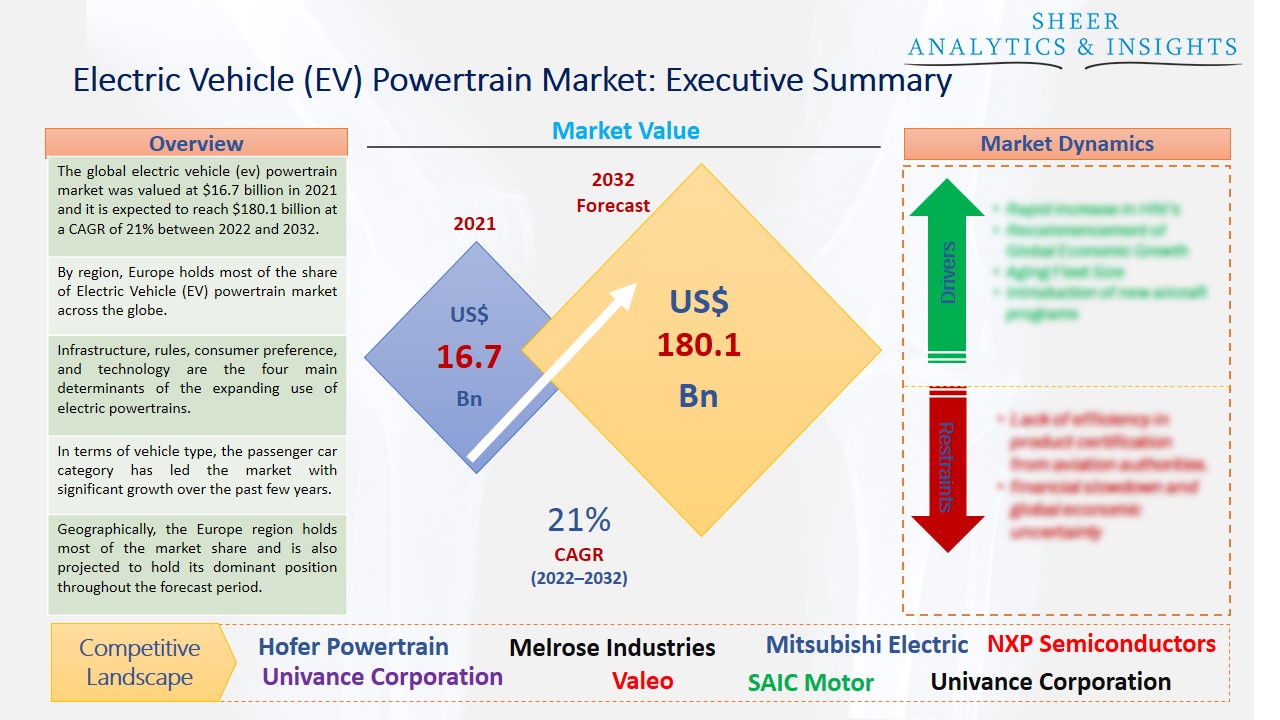 Infrastructure, rules, consumer preference, and technology are the four main determinants of the expanding use of electric powertrains. The global adoption of electric powertrains in the future will be heavily influenced by the penetration of PHEVs and BEVs. In the U.S. and Europe, regulations governing the monitoring of CO2 emissions are getting more stringent. Additionally, the powertrain is an important component of the electrical vehicles that are still being introduced to the market this year. The desire for electrically powered vehicles will drive the EV market to rise even in the upcoming years. People are curious about electric cars and vehicles in general.

Major automakers including Toyota, Honda, Tesla, General Motors, and Ford, among others, are projected to make significant investments in electric vehicles in the coming years, propelling the demand for electric motors. Additionally, it is anticipated that the global market for electric vehicle powertrains would grow as a result of the evolving partnerships between automakers and motor manufacturers. In light of this, it is anticipated that over the projected period of 2022 to 2032, these growing variables will drive market expansion.

However, Given that the rare earth metals used in permanent magnets for synchronous motors are susceptible to export limitations and supply issues, the market for electric motors is anticipated to experience problems in this area. One of the main issues pushing the automakers to switch from IC powertrains to the electric powertrain is the depletion of oil and gas reserves, in addition to the expanding activity in the development of electric vehicles on the worldwide market.

Based on technology type, the BEV segment accounted for the largest share of this market and is anticipated to drive the market during the forecast period due to its rising demand across several emerging nations in various regions. A BEV's only power source is an electric drivetrain that is powered by rechargeable batteries rather than an internal combustion engine or petrol tank. To charge, a BEV must be plugged into an electrical outlet. The large percentage can be attributed to declining ICE vehicle sales and CO2 target constraints. Additionally, the demand for BEVs is being fueled by government initiatives in well-known places. The U.S. government's proposal to put EV chargers along highways as a crucial component of reaching climate objectives is one such example.

In terms of vehicle type, the passenger car category has led the market with significant growth over the past few years. This segment is also projected to boost market growth over the forecast period from 2022 to 2032. Growing consumer demand for automobiles for regular transportation combined with the quick uptake of electric vehicles, particularly in developing nations, is driving this market's expansion for EV powertrains. The expansion of the EV powertrain market in this sector is projected to be driven by transit agencies' increased adoption of electric buses, particularly in China and India, better grid solutions, and the development of vehicle-to-grid services. On the other hand, the commercial car segment is also anticipated to create more growth opportunities in the future due to rising demand in several countries from Asia-Pacific and North America.

Geographically, the Europe region holds most of the market share and is also projected to hold its dominant position throughout the forecast period. High levels of EV adoption have been seen in nations including the Netherlands, Norway, France, and Sweden, and this trend is likely to support the expansion of the regional market in the area. With the majority of automobile manufacturers, including Audi AG, Volkswagen AG, and BMW AG, among others, Germany is one of the world's main automotive centers. On the other side, the Asia-Pacific region is also expected to become the second largest region in the future. China, Japan, South Korea, and India are a few of the region's leading producers of automobiles. The main reason for the significant market penetration is several legislative initiatives promoting EV sales, including EV sales quotas, fuel economy targets, and benefits for EVs in the allocation of license plates in nations like China.

The Global Electric Vehicle (EV) Powertrain Market Has Been Segmented Into: