The global syringes was valued at $18.4 billion in 2021 and it is expected to reach $50.9 billion at a CAGR of 9.2% between 2022 and 2032. The market for syringes is expanding as a result of factors including the rising elderly population, the high prevalence of chronic diseases worldwide, safety syringe usage, technical improvements, and increased demand for vaccinations. The main obstacles in the market, however, are the high cost of safety syringes and the rising number of needle stick injuries.

By region, North America is expected to dominate the syringe market across the globe.

A short hollow tube is used to inject or remove liquids. It might be connected to a needle so that fluids or medications could be injected into the body. Aside from that, A plunger that snugly fits within a tube makes up the simple piston pump known as a syringe. A liquid or gas can be injected into and expelled from a syringe through an aperture at the open end of the tube by pulling and pushing the plunger within a barrel. The RECOMMENDED technique for drawing from tiny veins is this one. Under a technician-controlled suction, they are less prone to collapse. For small volume draws, this approach requires less handling than the Vacationer System. Using a disposable syringe has several benefits, but sterilization and security are the two main ones. Since disposable syringes are disposed of after use, patients are no longer entirely dependent on the doctors' sterilizing techniques for their safety. These major benefits are anticipated to drive the growth of the syringe market during the forecast period. 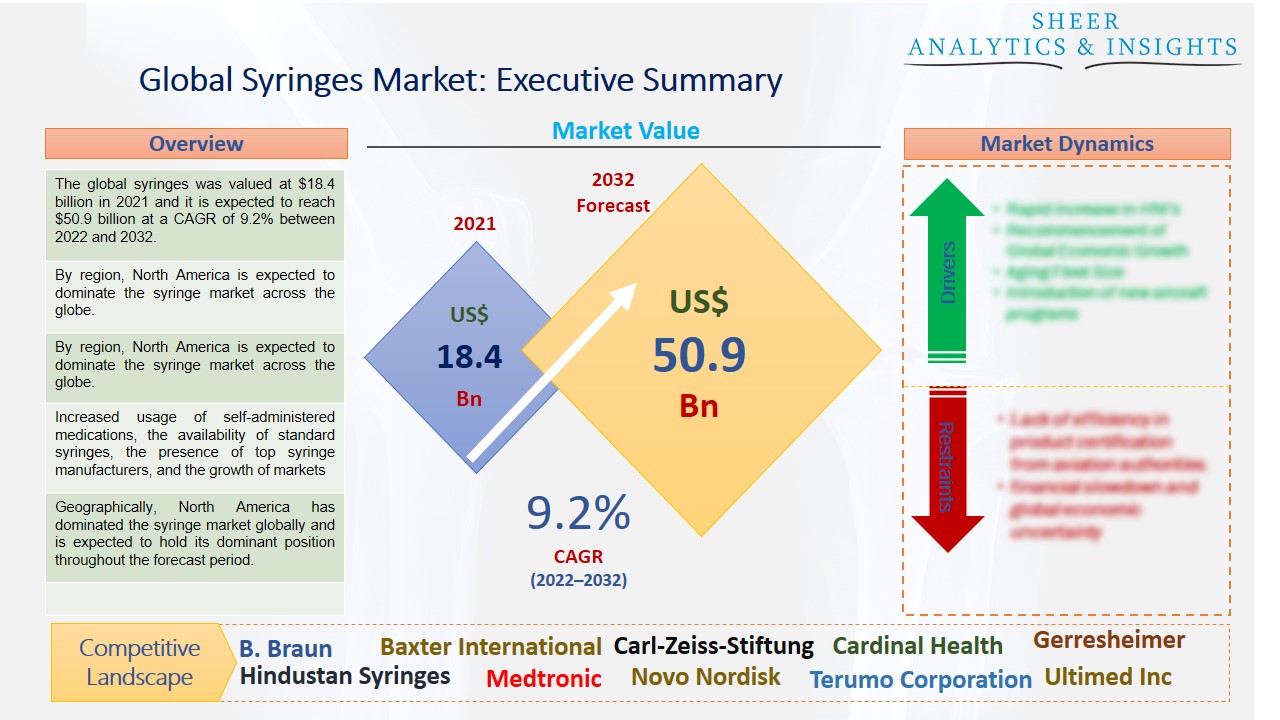 Some of the key drivers behind the growth of the syringes market include the rise in vaccination administration rates around the world, expansion of the healthcare sector, rising incidence of chronic and infectious diseases, rising popularity of disposable syringes, and rising preference for injections because of their quick actions. Additionally, the sales of medical syringes are being positively impacted by the booming markets for insulin syringes and prefilled syringes in developing nations. In addition, it is anticipated that over the next years, the adoption of injectable medications will expand, as will syringe technology developments, the aging of the population, and the expansion of vaccination and immunization programs. These primary drivers are expected to accelerate the market and are also projected to gain more growth opportunities over the forecast period.

Increased usage of self-administered medications, the availability of standard syringes, the presence of top syringe manufacturers, and the growth of markets for prefilled syringes, home healthcare products, and insulin syringes are all factors contributing to rising syringe sales across nations like the U.S., Canada, Mexico, and others. The spread of various viruses and diseases has led to an expansion in the healthcare and medical industries worldwide. In addition, people are becoming more health concerned, which is leading to an increase in the use of healthcare services and facilities. However, it is anticipated that the market in several underdeveloped countries will be hampered by the high price of particular syringes.

In terms of end-user, the hospital segment holds the largest share of the market over the past few years and is projected to propel the market growth in the upcoming years. Additionally, the fast expansion of hospitals around the world, people's desire for receiving medical care there, and the increasing use of syringes for a variety of reasons in hospitals are all driving this market's expansion. On the other hand, diagnostic centers are estimated to grow and dominate the market due to rising awareness of several chronic diseases across several emerging nations. These are forcing people to go and visit doctors at the diagnostic center. A diagnostic center performs medical diagnoses on people of different ages and genders. These facilities have the necessary laboratory tools, trained workers, and medical personnel to help them identify diseases in patients who are exhibiting specific symptoms or indicators.

Geographically, North America has dominated the syringe market globally and is expected to hold its dominant position throughout the forecast period. The expansion of the North American market is being driven by a variety of factors, including rising product approvals, rising consumer awareness of specialty syringes, rise in biologics approvals, and rising innovations in injectable devices. On the other hand, the Asia-Pacific region is projected to hold the major share of the market. The market in the Asia-Pacific region is anticipated to be driven by elements like improving economic conditions, rising consumer spending power, increased awareness of the benefits of prefilled syringes, and the presence of a sizable patient pool suffering from various chronic diseases.

The Global Syringes Market Has Been Segmented Into:

The Global Syringes Market – by Regions: